August 13, 2011
Not that far from here, just across the Channel in the north of France, lies the little town of Arleux, where they’ve been producing smoked garlic for over 400 years. Originally, it seems, the garlic was smoked to ensure that it could be kept for a long period but these days it’s more for its flavour.

I first heard of Arleux when I came across a version of this simple soup, although I have to admit that this recipe is not authentically Arleusienne. It’s also not as overwhelmingly garlicky as you might think, especially since I’ve near enough halved the amount of garlic in the original.

Quite rightly the people of Arleux celebrate their local produce by holding a festival - ‘La foire à l'ail fumé’ - in September every year  and have a Confrérie to support and promote the garlic - La Confrérie de l'Ail Fumé d'Arleux. I’m particularly pleased to note that they wear fantastic hats designed to look like garlic bulbs. 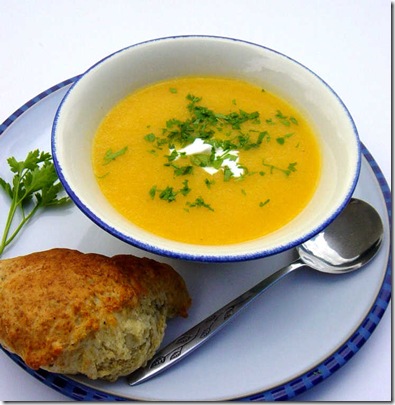 Finally, before I get to the recipe, I have to confess that I used British smoked garlic when making this soup. We produce excellent smoked garlic in this country these days, but we just don’t come close when it comes to wearing great hats to prove it. When choosing the garlic for this soup choose the smokiest you can find. The traditional variety of garlic grown around Arleux is relatively small compared to some smoked garlic I’ve seen, which is why I’ve given an indication of the total weight of the cloves needed.

This amount will serve two and, although the garlic isn’t overpowering, don’t arrange too many close encounters for the rest of the day, just in case.

Bring 1 litre of water to the boil and add all the vegetables. Add a generous amount of pepper and a little salt and bring back to the boil. Turn down the heat and simmer very gently until all the vegetables are completely tender. This could easily take an hour if you’re cooking it gently enough. (If the mixture starts to dry up, add a little more liquid and turn the heat down a touch).

Allow the mixture to cool a little and whiz it in a blender until smooth. Adjust the seasoning and a little extra water if the soup seems too thick.

To serve, reheat the soup, add a dollop of crème fraîche to each bowl and sprinkle with the chopped parsley. Some versions of Arleux soup call for garlic croutons to be served with it; personally, I think that might be a clove too far. 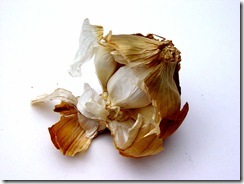