October 12, 2011
My apologies for the lack of posts and responses to email and comments for the last week or two. I was wandering around Normandy and out of touch with technology. I was very much in touch with apples, cider, pommeau and calvados, of course, and so I think an apple recipe is in order. In fact, this recipe is from the Sarthe region rather than Normandy but let's not worry about geography. Pommé is a kind of apple jam without added sugar – well, actually it's more of a cross between a jam and an intense compote. The only ingredients are dessert apples, cider and a lot of time. The result is an amber-coloured, soft jam with an extraordinary depth of apple flavour.

The flavour of  pommé will vary a lot with the type of apple chosen and I think the best option is to use a mix of sharp and sweet apples, if you have them. I used a mix of British dessert apples with Worcester Pearmain the main variety. The recipe doesn’t take a lot of effort once the preparation's done but you do need a day when you don’t really want to stray too far from the kitchen. (I have a fair number of those).

To make this properly you really should have a cooking pot suspended over an open fire in a Sarthe farmhouse, but, since I don’t have either the farmhouse or the fire, this method has been tested in an ordinary kitchen. You should end up filling about 4 standard jam jars. 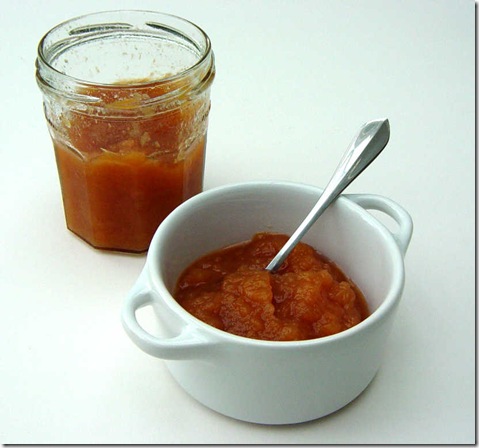 Peel, core and quarter the apples. Put them in a decent-sized preserving pan and pour over a third of the cider. Put the pan on the heat and cover. Cook gently for 3 hours, stirring every so often to make sure that the apples don’t stick.

After 3 hours you should have a very loose compote. Add another third of the cider and continue cooking the mixture with the lid off for another 3 hours. Don't forget to keep stirring every so often.

Six hours after you started you should have an intensely fragrant mix which has an unfortunate resemblance to wallpaper paste. (Try to ignore this fact - I'm sorry I even mentioned it). Add the final third of the cider and continue cooking and stirring for another 2 – 3 hours. The colour should now be a pleasing amber and the mixture will have thickened somewhat. (It will never become a solid jam – it’s really not meant to be).

Allow the pommé to cool slightly, pour into sterilised jars and, once cooled, store in the fridge. It’s good with breakfast, can be used with savoury dishes (notably pork, of course) and is great in desserts.

Of course if you do have an open fire in a Sarthe farmhouse then can I come round some day? We could make pommé  and eat sablés all day long.
Apple France Historic Recipe Jam