An Eccles Cake For Mr Henri

Back in the latter part of the 1960s there was a particular book that came to be essential reading for anyone in the UK wanting to read poetry but who thought they might just be vaguely in tune with the times as well. “The Mersey Sound” was a Penguin paperback collection of poems by Adrian Henri, Roger McGough and Brian Patten and was just about affordable to anyone. My copy cost 4 shillings (20p). 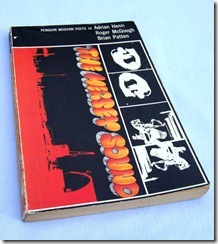 Over the years I’ve lost and given away a large number of books, but I’ve always kept this one – even if it is tattered and yellowing. The other day, I happened to hear a Liverpool Scene track (the band that included Adrian Henri as resident poet) and I decided to reread his poems from this ancient volume.  The last Henri poem in the collection ‘Mrs Albion You’ve Got A Lovely Daughter’ (click on the title to read the poem) is an ecstatic celebration of Liverpool (‘Albion’s most lovely daughter’) and the girls who live (or rather lived) there.

But since I’m somewhat obsessed with food (this is a food blog after all) the image that stuck in my mind was of the daughters of Albion ‘eating hot ecclescakes at the Pierhead’.

I first went to Liverpool in 1984 at the time of the International Garden Festival. The city had changed since the sixties and it was the first time that I’d thought of it as more than the home of the Beatles and the poets. Although I’ve been back to Liverpool many, many times since, for some odd reason this poem always reminds me of that first visit and that slightly surreal festival.  Still, an Eccles cake isn’t a really a cake in the usual sense, so a little oddness seems quite appropriate.

Sadly, Adrian Henri died towards the end of the year 2000 but, of course, Liverpool continues to change. Recently, as I was walking through the vast expanses of retail opportunities available at the Liverpool One shopping centre, just a short distance from the Pier Head, I did wonder what Adrian Henri might have made of it. Not surprisingly, I saw far more pizzas and cappuccinos than Eccles cakes there.

I’m not pretending that this is an authentic Eccles cake recipe but it’s the way I like them to be. For instance, the filling normally contains candied peel but I prefer it without and I was always told that they should be made with a lard-based, flaky pastry and I use a buttery puff pastry. You could make your own pastry but, to be honest, I didn’t bother. 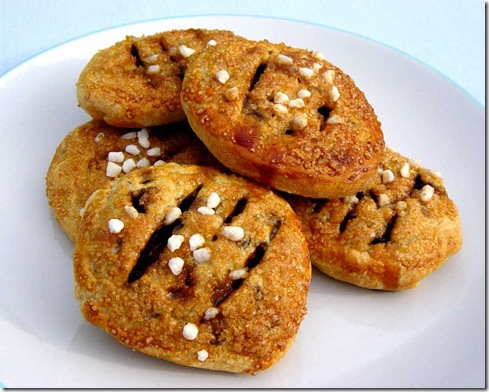 This makes about 8 cakes, although it’s perfectly possible to make them smaller or larger if you’d prefer.

Roll out the pastry to a thickness of around 3mm. Cut out circles using an 11cm diameter cutter (although smaller or larger cakes will work fine if you prefer). Add around 2 heaped teaspoons of the filling to the centre of each pastry circle. Lightly dampen the perimeter of the circle, draw the edges of the pastry up and pinch together to seal and make a small parcel. Turn the cake over so that the seam is underneath and press down lightly with your hand or the rolling pin to flatten the cake. Ideally, the fruit filling should look as if it’s threatening to break through the pastry without actually doing so. Brush the tops of the cakes with egg white and sprinkle over some demerara sugar and a few sugar pearls, if you have them. (Simply scattering on some caster sugar would probably be closer to the traditional version). Cut three slashes into the top of each cake, through to the filling. I’m sure that I was told long ago that there should be three slits in each cake, but some people create two and some cut a V shape.

Put the cakes on baking sheets covered with non-stick baking paper or silicone sheets and bake in the oven for around 15 minutes until they’re nice and golden brown round the edges. If a little filling bubbles out, then it really doesn't matter. Cool on a wire rack.

Actually, I know that Mr Henri says hot but I prefer them cold or, even better, slightly warm. Fergus Henderson pointed out in his book “Nose To Tail Eating” that Eccles cakes are particularly pleasing with some Lancashire cheese. For some reason, I’d never thought of doing that before, but I can now report that he’s absolutely right.

I’m entering this in the latest Novel Food challenge (no. 16) hosted by Simona of the blog Briciole, despite the fact that it’s not a novel. One day I might think of a novel for this literary challenge but somehow food and poetry seem to go together for me.