August 07, 2012
You may have noticed that London is hosting the 2012 Olympics. I have the greatest respect for Olympians and sports people everywhere but sport tends to baffle and bemuse me in a similar way to calculus. I accept that it’s my loss. The only real exception for me  is cricket and even then I only enjoy the game when nothing much is happening.

On the other hand, since the Olympic Cycling Time Trials took place in Surrey and actually passed by about a 1 minute walk from my front door, I would have to be a serious curmudgeon not to take a look. Well, I may be a curmudgeon but I’m rarely serious.

I reckoned that I’d need sustenance to keep me going throughout the event. As I understood it (which is not very well), the cyclists in the time trial would set off at 90 second intervals, so I’d have to make something that I could eat in less than 90 seconds. That seemed to call for biscuits. Of course, it had to be British biscuits for patriotic reasons and so I baked some very traditional Devon flats.

I’m not sure that the Time Trials turned me into a cycling fan but there was a relaxed party atmosphere among the spectators and everyone seemed to have  a great time. The biscuit plan, however, didn’t quite work. I made them too far in advance and they’d been eaten by the time of the event.

This is a very old recipe and I don’t think I’ve mucked about with it too much, although I do add a little baking powder which some traditionalists might consider a heresy. This will make around 24 biscuits, although that will depend on how thin you want to make them. 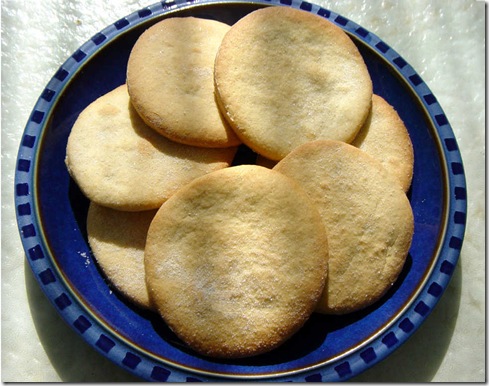 Sieve the flour and baking powder together and stir in the sugar. Pour in the cream and the egg. Mix the whole lot together either with a wooden spoon or using a mixer on low speed. You want to end up with a soft but not sloppy dough and there's a chance that, once the ingredients are thoroughly combined, you will have a dough that’s a little too stiff. Add a teaspoon or two of milk to soften the dough if it needs it, but don’t overdo it.

Cover the dough and put in the fridge for 30 minutes or so. This stage is not essential but it’s a good idea to chill the dough to make it easier to handle. If there’s anything at all tricky in this recipe, then it’s rolling out the rather sticky dough.

Preheat the oven to 190°C. Roll the dough out thinly on a floured board and cut out the biscuits using a 7 cm round cutter. Place on greased or lined baking sheets and sprinkle lightly with a little extra caster sugar. Bake in the preheated oven for around 10 minutes until the biscuits are golden brown on top. Cool the biscuits on a wire rack and store in an airtight container once cold.

Actually, I must confess that I also have a certain fascination with the Olympic  Human Don’t Be Angry finals but I can’t seem to find them in the TV guide.
Biscuits Britain Historic Recipe