August 17, 2013
Some of the recipes on As Strong As Soup can be pretty simple, but I think this is the first with only two ingredients. For this month’s Random Recipe cookbook challenge Dom of Belleau Kitchen asked ‘If you had 10 seconds to grab one book, which one would it be?’ I was pretty certain that I would either grab a comprehensive, general recipe book or one that would give me a nostalgic glow (Floyd on France, perhaps).

It didn't work out that way. When I gave myself 10 seconds, I panicked and just grabbed the biggest book available. On my shelves that’s Larousse Gastronomique. Not an obvious choice since it’s not really a recipe book as such. But I randomly opened the book and randomly selected a column and was somewhat disturbed to see that the first recipe was included in the entry for Molecular Gastronomy.

Fortunately, though, it turned out to be Hervé This's method for creating Chocolate Chantilly. Essentially this technique allows you to create a chocolate cream or mousse using only chocolate and water. It gives a purity of taste that’s impossible to equal by any more normal method. Conventional wisdom and experience tells you that water and chocolate never mix and this technique demonstrates just how wrong that is. You may have seen Heston Blumenthal demonstrating this recipe on TV and you can find it on the BBC site here, although sadly Dr This is not credited with its creation. I’d never tried this before, but I'm very pleased (and a little surprised) to say that it works beautifully. 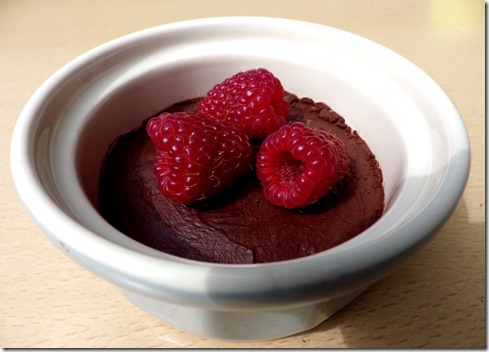 There’s not much I can add to Mr B’s version of Dr T’s recipe except: