October 30, 2014
Every year at around this time Le Festival Des Soupes et Des Pains (The Festival of Soup and Bread) is held either in or around Montreuil-sur-Mer, but I've heard that apparently this year’s event had to be cancelled. So I thought I'd put this soup together to compensate myself in a small way for that loss. (Not that I could have been there physically, but I definitely intended to be there in spirit.)

There are many types of beer soup across the north of France as well as in Belgium and northern Germany. Some versions seem to me to be little more than beer warmed up with a bit of seasoning but this version is closer to a northern French recipe using some of the fine root veg from the area. I roast the veg to concentrate the flavour although I doubt that roasting is very traditional.

This type of soup is very often served with croutons and grated cheese. Typically the cheese would be gouda or emmental although you can use whatever hard cheese you fancy - some cheddars would be a good option. Given the choice, though, I'd probably go for a mimolette. The Bernard brothers produce a particularly fine mimolette at Wierre-Effroy, which is just a little way down the road from Montreuil. (I've referred to the brothers before but I felt guilty for not mentioning their very fine mimolette).

If you're expecting the kind of subtly flavoured French soup that you might find in a refined French restaurant then think again. This soup has a strong and distinctive flavour and, for that reason, I think it's best served in small bowls as a winter starter. The amounts given here will provide you with 4 starter portions. Of course, if you really love beer, then by all means have a large bowl. 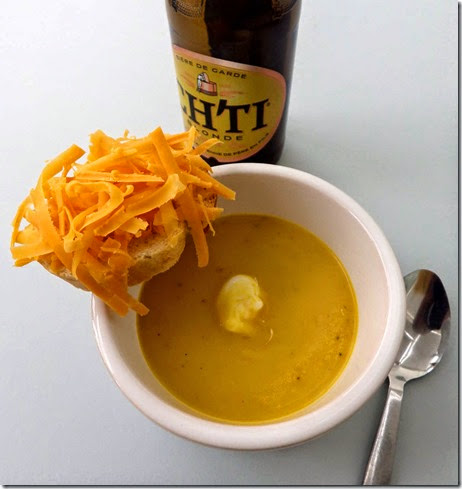 3 average or 5 small carrots (I used small chantenay carrots) - a total weight of between 200 g and 250 g
1 leek
1 large or 2 small shallots
½ tsp sugar
250 ml bière blonde (use an interesting lager if you can't find a French bière blonde)
300 ml chicken stock, plus another 100 ml on standby just in case the soup needs it (use a vegetable stock if you prefer, but chicken stands up better to the beer flavour)
4 - 8 tbsp crème fraîche
100 g hard cheese (see above)
A few thin slices of baguette for croutons

Preheat the oven to 180ºC. Wash and peel or scrape the carrots (if they need it) and cut them into large chunks. If you’re using smaller carrots, then cutting them in half lengthways should be enough. Coat the carrot pieces in a little oil and place on an oven tray. Wash the leek, dry it and place it on the oven tray alongside the carrots. You don’t need to do anything else to the leek. Put the tray in the oven and roast for around 30 minutes until the carrots are almost completely tender and the leek has softened and collapsed a little. (Don't worry if the leek looks a little brown or even burnt on the outside; you don't need the outside leaves.)

Chop the shallot finely and, using a large pan, soften it slowly in a little butter. While that's happening remove and discard the base, the outer leaves and any coarse green part of the leek. Chop the softened leek and carrot pieces roughly. Once the shallot has softened add the leek and carrots to the pan, season and pour in the beer and stock. Stir in the sugar. Bring the mixture to the boil, cover loosely, turn down the heat and let it simmer for 20 minutes or so.

Liquidise and adjust the seasoning. You may also need to add a little more sugar if the beer is a less sweet variety. Add a little extra stock if the soup is too thick. Pour into bowls and stir in as much of the crème fraîche as you think the soup needs. Don’t skimp on the crème fraîche: it’s an important part of the soup and not simply a garnish.

Fry or toast the slices of baguette to use as croutons and grate your chosen cheese on top of the croutons or into a small bowl to serve alongside the soup.

By the way, if you've never been to Montreuil-sur-Mer and feel that you might be tempted to visit one day (after all it’s less than an hour’s drive from the tunnel) then it might be helpful if I point out a few random things: