January 23, 2015
A while ago I was asked what was the first ever recipe that I'd collected. I've been tearing recipes out from newspapers and magazines and jotting others down for a very long time but everything before about 1983 has been lost somewhere along the way. I did some digging and came up with this which is just possibly the earliest surviving recipe in my collection.

I can't remember where the recipe came from but I'm fairly sure it wasn't called “bogus” in the original. It is bogus, though, and has only a distant connection to the original Café de Paris recipe. This may be partly my fault because I think I played around with it a fair bit before I wrote it down but I believe that the real sauce served in the Café de Paris in Geneva is a creamy sauce that’s allegedly made using chicken livers. (Although maybe not - the actual recipe is still secret). To make things even more confusing, there are plenty of recipes for a Café de Paris butter around and that’s an entirely different beast. 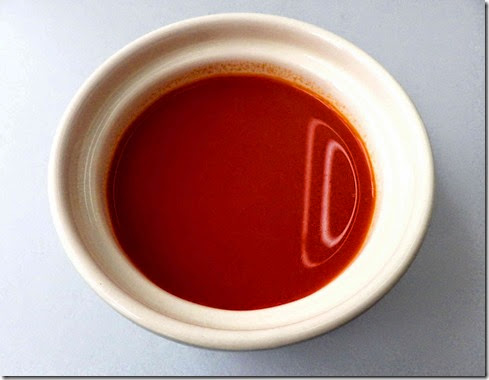 Sauces like this aren't very 2015 - not many people seem to make them these days. That's a shame because this is really useful, easy and versatile. This sauce was intended to accompany steaks and there's nothing wrong with that but it will also sit very well alongside pork and, my favourite, simply cooked lamb.

Making sauces might seem a bit of a faff but there's not much work involved, it can all be done in advance mostly using store cupboard ingredients and you'll get enough sauce from the amounts given here for around 6 servings. If you don't use it all at once, it will keep for several days in the fridge and freezes well.

If you don't have any tarragon vinegar then simply increase the amount of sherry vinegar, but I must admit that the hint of tarragon does add an extra something.

Put the carrots, fennel and shallots into a processor and reduce them to very small pieces. Place them in a large frying pan and fry gently with a little butter for about 5 minutes, stirring frequently. Stir in the crushed garlic and continue frying gently for a further 10 minutes.

Add the two vinegars to the pan followed by the tomatoes, stirring to ensure that the tomatoes are broken up. Add the sugar, tomato purée, mustard, marsala and stock. Season well. Bring to the boil, turn down the heat, cover the pan and simmer gently for 1 hour.

Pour the contents of the pan through a fine sieve. Press down on the puréed veg to extract as much of the liquid as possible. Stir in the lemon juice. (Alternatively, you could just liquidise the whole sauce. It will be thicker and cloudier and personally I don't think the texture and flavour of the liquidised version is quite as good but at least you won't waste anything.)

There are a number of ways of finishing this sauce before serving. The simplest way is to reduce a little of the sauce to thicken it slightly and pour it around your chosen piece of meat. Whisking in a little butter at the last moment will give the sauce a gloss. Adding more mustard along with the butter will work well if you fancy a bit of heat. Or whisk in some crème fraîche for a slightly richer finish. You could also add fresh herbs: a generous sprinkling of parsley would be the obvious choice.

Serve with your choice of meat and imagine yourself in Geneva. Unless, of course, you are in Geneva, in which case I can't think what to suggest.

Janis at Farmersgirl Kitchen has started a new blog event #RecipeClippings this month to encourage us to dig out recipes from our collections of cut out and copied recipes. I think this should fit in quite nicely even if I haven't the foggiest idea where I found it.