June 22, 2015
I first came across marmalade ice cream sometime in the 1980s when Sophie Grigson published the recipe in a London evening newspaper. At least, that's if my memory is to be trusted, which it's not for the most part. Essentially the recipe is a simple combination of double cream and marmalade and produces a rich, no churn ice cream beloved by just about anyone who tries it. Very similar recipes have appeared quite often over the years since then.

I thought I'd try making a lighter version of this little treat using zero fat yoghurt and I'm pleased to say that it works well. Let's not pretend that it's healthy, though: there's virtually a whole jar of marmalade in this recipe. Until recently I would usually strain low fat Greek style yoghurts when making frozen desserts but there are some in the shops now that are thick enough to make that unnecessary.

I've tried making this by simply putting the mixture in the freezer and also by using my very basic ice cream machine and, although it works well using the no churn method, it's a little smoother if you can face using a machine.

Sometime in the 1980s I went with a friend to a party somewhere in Fulham and having enjoyed a few refreshing, cold drinks, I spent a couple of hours passionately talking food to a woman that I was sure was Sophie G. I have a nasty feeling that I was explaining my theory about British regional food. I did that a lot back then. These days I can't quite remember what that theory was. My friend told me afterwards that it most definitely wasn't Sophie G and didn't even look vaguely like her. But, then again, around the same time this same friend mistook Tom Robinson for a waiter, so who knows? Sophie or not, I can only apologise 30 years too late to that poor, bored woman. I went home alone on the night bus. 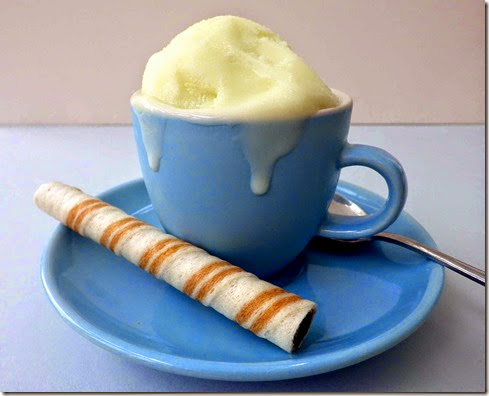 If you want a very smooth frozen yoghurt then you could sieve out any peel from the marmalade, but I wouldn't usually bother. Whisk the marmalade lightly to loosen it and stir in the yoghurt and limoncello. Put the mixture in the fridge to chill thoroughly. Put into the ice cream machine and let it churn in the recommended way. Alternatively, just place in a suitable container in the freezer and let it get on with it. It won't be quite as smooth, but life's not always totally smooth either.

This recipe will work with other types of marmalade, of course. For instance, you could use a thin-cut orange marmalade and substitute an orange liqueur for the limoncello.
Dessert Ices Lemons Lime