Turkey with Beer and Juniper

December 06, 2015
Just over the channel in the Nord-Pas-de-Calais there's a village called Licques which is noted for its fine poultry. But of all the fine poultry produced in the area turkeys are the most celebrated, especially during ‘La Fête de La Dinde’, which is held every December. There are prizes for the best birds, a local Christmas market and enough food and drink to keep out the cold. Everyone has a fine time, except possibly the turkeys. The festival is said to have sprung from the time when the local farmers herded turkeys through the village to their inevitable pre-Christmas fate. As a result there's still a parade through the village with a marching band and the poor old turkeys. (I'm told that this year's festival will be held from 12th to the 14th December and some mechanical turkeys are promised).

Paraded or not in my opinion a turkey is for lunch and not just Christmas. (I know quite a number of people who refuse to eat turkey at any other time than the day itself and that seems a shame to me). But I thought I'd get this recipe in early before everyone starts roasting birds the size of planetoids. This recipe is based on a dish from the Licques area. It's very much a winter dish and typically for the area uses beer rather than wine, root vegetables and a dash or two of the local genièvre. 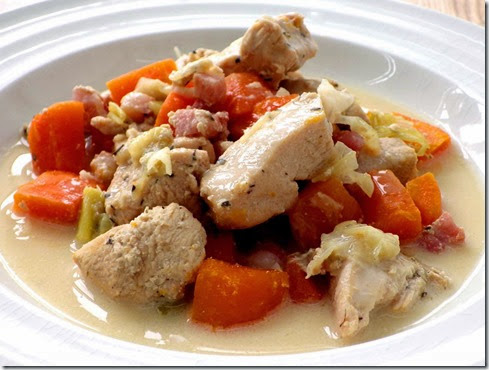 The crucial thing about this simple dish, apart from good beer and fine turkey, is very gentle cooking. In French recipes you might well come across the word ‘mijoter’, which is usually translated as simmering or slow cooking. When it comes to this kind of very gentle simmering there's an even better word with a descriptive sound - ‘blobloter’. This means the kind of gentle simmering where the surface of the liquid just trembles with merely an occasional bubble rising to the surface. At least, that's what I was given to understand. Allowing for my lack of language ability and general gullibility it may turn out to mean something very rude.

This recipe needs to be started the day before serving. It should serve 4 or maybe 3 if you need hearty winter portions to keep out the cold.


Put the turkey chunks into a non-reactive bowl. Combine all the marinade ingredients and mix with the turkey. Cover the bowl and place in the fridge for at least 5 or 6 hours but preferably overnight.

Drain and reserve the marinade. In a large pan fry the bacon or pancetta until the fat begins to run. Add the drained turkey and vegetables and stir them around just long enough to get a small amount of colour. Sprinkle the brown sugar into the pan and pour in the reserved marinade. Top up with just enough chicken stock to cover the turkey. Put a lid on the pan and allow the mixture to simmer very gently for 1½ - 2 hours or until everything is nice and tender.

Uncover the pan, lift out the vegetables and turkey with a slotted spoon and keep warm. Turn up the heat and reduce the cooking liquid by about half. If you prefer the sauce to have more of a coating consistency, then you could use a little cornflour to thicken the cooking liquid a touch more. Whisk in the crème fraîche and pour the sauce over the turkey and vegetables immediately before serving.

I'd be very happy serving this with plain rice but potatoes are probably more traditional.
Beer France Turkey