December 22, 2015
This simple recipe is based loosely on a chutney from a restaurant somewhere in France (I can't quite remember where) and was intended to liven up simple game dishes. I think it would do very nicely on turkey sandwiches or alongside a leftovers curry around this time of year.

If you're short of time, chop everything in a food processor - it won't make a big difference to the finished chutney. Vary the amount of chilli flakes and sugar according to how hot or sweet you like your chutney. This amount will make around 5 small jars. 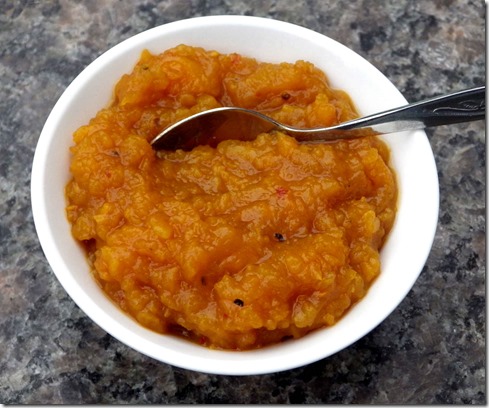 Put all the ingredients in a large, non-reactive saucepan and bring to the boil. Simmer, stirring every now and then, until the cooking apple has collapsed and the squash is tender. If the mixture seems to be drying out too much, then add a little water.

I prefer this chutney not too chunky so I take the mixture off the heat and attack it with a potato masher until I get the kind of texture that appeals but that's optional. Once the mixture has cooled a little, put it into sterilised jars, seal and label. This chutney is ready to eat pretty much immediately although letting it mature for a few days would be no bad thing. I can't guarantee how long it will keep - I tend to make small amounts rather than keep chutneys for too long.

But enough of these quasi-Christmas recipes, it's the moment that nobody's been waiting for as I indulge myself with some of this year's favourite music in my kitchen. There's far too much good stuff to choose from this year but I've tried to go for the less well-known and, because it's very nearly Christmas, the more cheerful and uplifting. In fact, if you're not cheered up by the Hafdis Huld clip, then you have a heart of steel. But first...

While you're on your way to Birkenhead, if you wander off the M53, you might well find yourself in Hooton. Hooton Tennis Club make it sound like the place to go for endless, lazy sunshine (well, they do for me). Their album ‘Highest Point In Cliff Town’ was released in August.

And now a short detour to Ireland for Owensie’s ‘Dramamine’, which is the only song (and album) named after a travel sickness remedy that I can recall.


It's my short-lived tradition to feature something in a language other than English and this year we find ourselves in Argentina in the company of Blito y los Intermitentes, who thankfully don't seem to take themselves too seriously. Their album ‘Nada’ can be downloaded from Bandcamp here and could not be any cheaper.


And so finally something else that's not in English. One of the delights of last Christmas for me was Hafdis Huld singing Christmas songs live on the internet from her pink house in Iceland. This year she made an album of Icelandic children's songs that isn't edgy, indie or trendy but I don't think there can be many better ways of getting into a happy, Christmassy mood. This song is called ‘Ein ég sit og sauma’ which I'm led to believe means ‘I sit on my own and sew’.