January 25, 2018
This is part two of my very short series of the Italian recipes that I felt I finally needed to write down. Like the caponata recipe I'm afraid it's probably a little elegiac in tone. I suppose that's what happens when you're as ancient as me. Never mind, it's the food that matters.

Alvaro Maccioni was one of the food celebrities in Britain through the 1960s and 70s. It's generally accepted wisdom that food in England was rubbish during that period but I'm not completely convinced. I admit there were certainly some highly questionable and eccentric restaurants around at the time but Maccioni's La Famiglia just off the King's Road definitely wasn't one of them. It tended to attract a celebrity crowd and hard up, scruffy people like me didn't necessarily eat there often - well, OK I did once or twice. Maccioni was a great advocate of authentic, delicious and often quite simple Tuscan food. Ahead of his time in many ways and hugely influential, he sadly left us in 2013, although La Famiglia is still there and carrying on the tradition if you'd care to visit.

This dish reminds me of Maccioni because I first came across a version of it in one of his books. Admittedly, this is my interpretation and not his recipe and probably not similar to the food served back then. Oddly, I've just realised that I have a signed copy of one of his books on my shelf but how I ended up with it is one of life's mysteries. My memory's not what it was and my excuse is that I was around in the 60s. At least I think I was.

This is easy to make, very delicious and is often claimed to be the inspiration for all French pâté. Well, maybe. This should serve 4 - 6 as a starter or as part of a simple lunch. 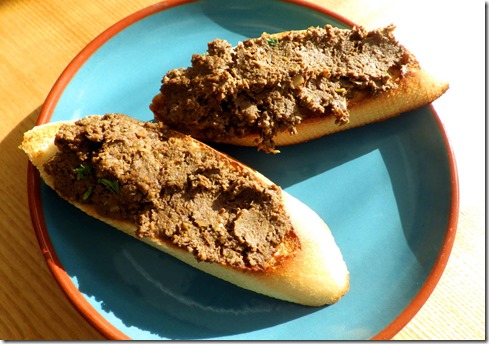 Fry the leek, celery and carrot in the 3 tbsp of olive oil until softened. It's best to do this on a low to medium heat and take your time over it. You want to soften the veg and not colour it. If the livers are on the large size, then chop them into 2 or 3 pieces and add to the pan. Continue to fry, stirring a lot, until the livers have taken on an even colour all over. Add the wine, increase the heat a little and keep cooking and stirring until the wine has reduced by about half. Add the capers and season with a generous amount of black pepper. (Don't add salt at this stage since the capers are likely to be quite salty). Continue cooking and stirring until the wine has almost gone.

At this point anyone with a deep respect for tradition will tell you to take the livers out of the pan and chop them thoroughly by hand. To be honest, I use an electric hand blender and whizz until smooth (or as smooth as you'd like it to be). Either way, return the liver mixture to the pan and stir in the tablespoon of extra virgin olive oil. (You could also add a little butter at this stage if you fancy a richer result).

Reheat the mixture gently. If it seems very firm then stir in a little water - it should be thick and creamy but not solid. Immediately before serving stir in the parsley, chives and lemon juice. Check the seasoning.

Serve while still hot (or at least warm) by spreading a generous dollop onto toasted slices of baguette, or whatever bread you fancy. You could rub the bread with a peeled and halved clove of garlic before adding the liver mixture if the mood takes you.

Just over a year ago we lost Peter Sarstedt who had a song that always makes me think of those very old days. If anyone wants me I'll be in Roger's old Jag driving round swinging London.