December 04, 2018
Le frésinat is a simple country dish from the Tarn region of France that consists mostly of pork and potatoes. That doesn't sound too promising but the combination of ingredients produces an intensely savoury and satisfying dish that's just perfect for winter. It's said to be the meal that was traditionally cooked as a thank you to the friends and neighbours who helped out when the farm pig was slaughtered. I don't have a pig or a farm and so I can't vouch for that. I just use pork shoulder from a friendly, local butcher. You could use other cuts, but it's best to avoid any that are too lean. (It's also best to avoid unfriendly butchers, funnily enough).

I'm not usually bothered too much about authenticity in my recipes and I often substitute ingredients. This dish, however, relies on the balance of simple flavours and I've learnt the hard way that it's probably best to not play around with the ingredients too much. For instance, if you swap the duck fat for butter or oil it turns into a much less pleasing dish in my opinion. (I should probably admit that I do add less fat than you might find in the Tarn). On the other hand, if you don't have any armagnac lying around, then you could use brandy or eau de vie or, if you really have to, leave it out altogether.  Should you be lucky enough to lay your hands on any rose (or pink, if you prefer) garlic of Lautrec, then that would be the ideal, local choice for this dish but, whatever garlic you choose, don't be shy with it. The four large cloves here is a minimum. 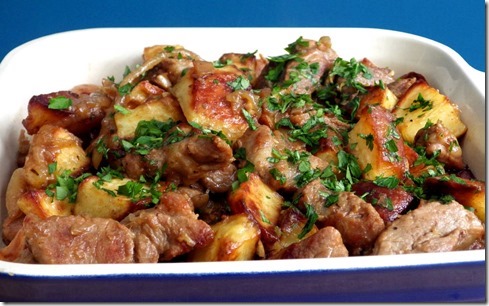 I can't claim that I learnt this dish in a Tarn farmhouse and it may not be entirely authentic but it's probably not that far away from the original and it works for me. I reckon this makes 4 portions but  it seems that traditional portions are often more generous than I'm being in these more restrained days.

700 g pork shoulder (or another cut that's not too lean), cut roughly into cubes
700 g potatoes (a fairly waxy variety is best), peeled and roughly cubed
2 onions, sliced
4 large garlic cloves, chopped  (or, if in doubt, add an extra clove or two)
A small glass of armagnac (or other spirit – see above)
Leaves from a large sprig of thyme
A small bunch of flat-leaf parsley
4 - 5 tbsp duck fat

Season the pork and brown it in a couple of tablespoons of duck fat (it's best to do this is in several small batches), then set aside. Add a little more duck fat to the pan if it's dry and fry the onions slowly until soft - 20 minutes or more would be good. Add the garlic and fry for 2 or 3 minutes. Pour in the armagnac and stir around until the liquid has all but disappeared. Return the pork to the pan together with any juices and add a cup of water and the thyme. Increase the heat until the liquid is simmering. Partly cover the pan and allow the mixture to simmer for an hour, stirring now and then. Make sure that the pan doesn't dry out completely before the hour is up, but you should end up with quite a dry result - the pork should be coated with a sauce rather than sitting in liquid.

While that's going on, pat the potato cubes dry and lightly season them. Preheat an oven tray with a tablespoon or two of duck fat and then add the potatoes. Roast in the oven until cooked through and golden (about 30 minutes, although that'll depend on the size of your cubes, of course). Turn them once or twice while roasting.

To finish the dish, stir the potatoes into the pork and check the seasoning. Chop the leaves of the parsley and add to the dish just before serving. (There should be plenty of parsley, so don't hold back). You could treat this as a meal in itself but some simple green veg definitely wouldn't go amiss.
France Garlic Pork Potato