February 27, 2019
These days Surrey is probably better known for commuting than farming but there's actually some very fine produce available locally. One product that's become increasingly common over the last few years is rosé veal. (I know that some people say rose veal and others say rosé veal but since I've no idea which it should be, I've chosen rosé at random). It's a very adaptable meat but, for me, it really comes into its own in this lighter type of casserole. The veal I used came from an excellent local producer, Hunts Hill Farm, who have a farm shop open several days a week as well as being a familiar fixture at several of the local farmers' markets.

This recipe is based loosely (very loosely) on a Spanish dish but the way I make it isn't in the least authentic. On the other hand, since it was born in Spain, I couldn't resist adding a little Pedro Ximenez sherry to finish the dish - that's optional, but very nice. You could also use a PX vinegar instead of common or garden sherry vinegar in this recipe, but you might find you need a healthy bank account for that particular product.

I prefer to serve this simply with plain rice but potatoes will work fine as well. This should serve 2 people fairly generously. 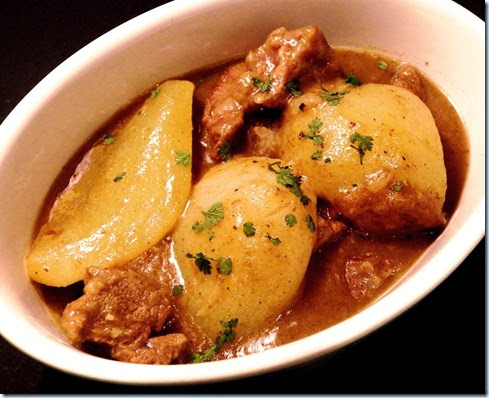 Peel, core and quarter the pears and put in a non-reactive bowl with the halved apricots. Pour over 2 tablespoons of the sherry vinegar, the lemon juice and the Calvados or Poire William. Toss the pears and apricots in the liquid and set aside.

Preheat the oven to 140°C. Soften the onion slowly in a little oil without letting it take on any colour. Once softened, add the garlic and continue frying gently for around two minutes. Transfer the onion and garlic mixture to an ovenproof casserole. Place the veal in a bowl, add the seasoned flour and toss the veal in the flour until it's thoroughly coated. Brown the veal in the frying pan in batches until lightly brown all over, adding more oil as necessary. Transfer the veal to the casserole, stirring it into the onions.

Deglaze the frying pan with the two remaining tablespoons of sherry vinegar, than add the white wine, making sure that you scrape up any nice browned bits from the base of the pan. Bring to the boil and let it bubble for about 1 minute, then pour into the casserole together with the 100 ml of chicken stock. The meat should be just covered with liquid, so add a little more stock or water if it needs it. Tuck in the bay leaf and the rosemary. Cover the contents of the pan with a cartouche, which is just a fancy way of saying a close-fitting piece of greaseproof paper laid directly on the liquid. Put the lid on the casserole and place in the oven for 1 hour.

At the end of that time, drain any remaining liquid from the pears and apricots and add them to the casserole. If there doesn't seem enough liquid left in the casserole, then add a little more stock or water. Cover the casserole again with the cartouche and the lid and return to the oven for another 50 minutes.

After this time, check that both the veal and the pears are tender and add a little more seasoning, if it needs it. Although the fruit will have added a fair amount of sweetness to the dish, it will probably benefit from a little boost at this stage. You could just add a little sugar or honey but, if you have any lying around, stir in a few teaspoonfuls of Pedro Ximenez sherry, which will add both sweetness and extra flavour. Return the casserole to the oven for a final 10 minutes.

Remove and discard the bay leaf and rosemary, assuming that you can find them, and garnish with a little sprinkle of chervil or parsley.


As usual, I bought the ingredients with real, folding money and the recipe is sponsorship as well as authenticity free.
Apricots Pears Surrey Veal