These biscuits are my modest (token, you might say) contribution to Christmas food this year. It may be a modest effort but it's a wonderfully simple recipe to put together and that's got to be a good thing. They're really pleasing with coffee and they're not just for Christmas.

Confusingly, this montecaos recipe is based on a French interpretation of an Algerian original that I came across a few years ago and they're sort of remote cousins of the mantecados that are made around Christmas time in Spain. The traditional Spanish mantecado recipe uses pig fat (manteca de cerdo means pork fat or lard, or so I'm told) but North African biscuits, not surprisingly, replace the pig fat with oil. It's best to use a fairly neutral oil in this recipe to avoid more powerful oils dominating the taste. Cinnamon is often used as the primary flavouring but there are many variations such as orange, almond or coconut. I've used lemon because I love it and it makes me think of warmer weather. 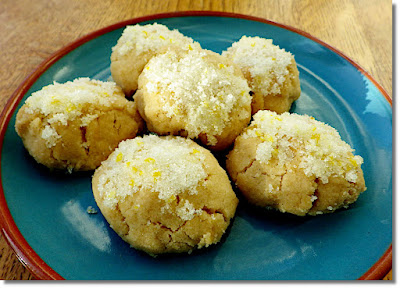 I added a topping of lemon sugar to form a crust, but you could just sprinkle with a little icing sugar instead. To make the lemon sugar just wizz together some granulated sugar and some lemon zest in a mini processor. Use whatever ratio you prefer - I used roughly the zest of ½ lemon to 100g sugar.

200g 00 flour
50g fine semolina
½ tsp baking powder
80g golden caster sugar
125ml neutral oil
1 tsp lemon paste or extract or around the same amount of very fine lemon zest
¼ tsp vanilla paste or extract
Lemon sugar to sprinkle after baking (see above)
Preheat the oven to 160°C fan.
I think it's best to use a machine for this next stage but it's not critical. Add the flour, semolina, baking powder, sugar, oil, lemon and vanilla to a bowl and beat together until the mixture resembles a sort of clumpy sand but comes together into a ball if you shape it with your hands. This won't take long.
Cover an oven tray with baking paper or a non-stick baking mat. Divide the mixture into around 18 or 20 pieces, shape them roughly into slightly flattened balls and place on the baking tray. (They will be crumbly and fragile at this stage but should hold together if you're careful).
Bake for around 20 minutes. It's important to avoid baking them for too long - they should darken very slightly but never brown. They will crack as they cook and that's just fine.
As soon as they come out of the oven, sprinkle with a generous coating of lemon sugar. Leave to cool for a few minutes on the tray before transferring carefully to a wire rack to cool completely. Try to be patient and make sure they're cold before attempting to munch one: they'll probably remain too fragile while warm.

Now, about that cocktail....
If you happen to have a little lemon sugar left over then it's a perfect excuse to add a sugar rim to a Nick & Nora glass (or any glass you can lay your hands on, to be honest) and make a Lemon Drop cocktail. I mucked about with the classic recipe a little on this occasion and added some limoncello. This drink is sour enough to wake you and your appetite up but, if you find it a bit too sharp, then cut down on the lemon juice a little or have some sugar syrup on standby.
I heard someone recently describe the Lemon Drop Martini as “very retro”. It was invented in the 1970s around the time that Brian Protheroe ran out of pale ale. It seems like yesterday to me and that must mean I'm very retro too. 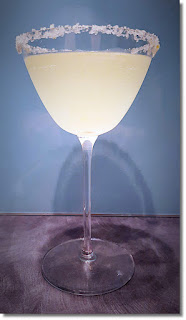 For 1 drink:
60ml vodka
20 ml Cointreau
20 ml limoncello
30 ml lemon juice
Dampen the rim of the glass and dip in the lemon sugar.
Add everything to a shaker and shake with ice.
Double strain into the glass.
Biscuits Cocktails Lemons