Thinking about my current (half-hearted) project to record recipes that I've failed to publish over the years, I realised that I've only included one apple cake recipe. This is odd because back in the 1980s I was strangely obsessed by apple cakes and collected recipes from all over the country. I found that there were broadly two types of English apple cake: one that was best served with tea in the afternoon and one that was best served as a dessert accompanied by custard or cream (clotted for preference, although in these restrained times yoghurt or fromage frais might be more acceptable).

So, to make up for the omission, here's a version of apple cake that's in the pudding category. It has a high proportion of apples to flour and remains very moist as a result. It does still work very nicely with afternoon tea, if sliced carefully. Sadly, due to erratic record keeping (I was like that in the 1980s), I'm not sure where I found the original version of this recipe. At a guess, I'd say it was somewhere in Dorset.

Firm eating apples work best in this cake and you'll probably need between 3 and 5 of them, depending on size. Cider would probably be the traditional choice for soaking the sultanas but calvados, brandy or fruit liqueurs add a pleasing bit of extra punch. I used a homemade damson rum, but that's just showing off. If you want to avoid alcohol, then apple juice will be fine. Use whichever spice or spice mixture you prefer but I think it's best to avoid overwhelming the flavour of the apples, so be a little parsimonious, if in doubt. 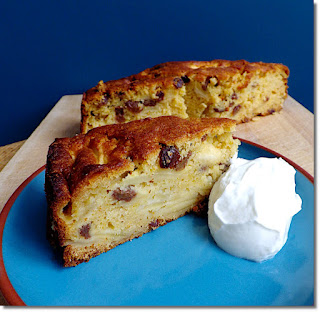 70g sultanas
120ml cider or calvados or brandy or liqueur or apple juice
250g self-raising flour
2 tsp baking powder
125g unsalted butter, diced
125g golden caster sugar
Spice: 1 tsp cinnamon or 1 tsp ground ginger or ½ tsp cardamom seeds, crushed
400g (or thereabouts) prepared weight of apples - peeled, cored and sliced thinly
2 eggs, lightly beaten
Soak the sultanas in the cider or whatever you like for at least 4 hours or overnight.
Butter and line the base of an 8 inch/20cm round cake tin (a depth of about 2½ inches/6cm or a bit more would be ideal). Preheat the oven to 180°C fan.
Add the flour, baking powder and butter to a food processor and pulse until the mixture is thoroughly combined and looks a bit like coarse sand. Add the sugar and your choice of spice and pulse to combine thoroughly. (Of course, you can do this by hand if you prefer). Pour the mixture into a large bowl.
Stir in the apple slices, the sultanas and any leftover soaking liquid. Stir in the eggs until evenly combined.
Turn the mixture out into the prepared tin and even out the top. Bake for around 40 minutes until the top of the cake is browned and a knife or cake tester comes out clean. (This test can be misleading because the large proportion of apple in this recipe will mean that the cake has a lot of moisture so, if in doubt, test more than once). The baking time for this recipe can vary a good deal due to the natural variation in juiciness of the apples you use. Cover the top of the cake with baking paper to prevent it browning too much if it needs longer in the oven.
Cool in the tin for 5 minutes or so before removing carefully from the tin (it's fragile while hot) and cooling completely on a wire rack. The cake is best served sliced either at room temperature or gently warmed with some sort of creamy substance or custard.
If you want to store this cake for a few days, then it's best kept in the fridge or, at least, somewhere very cool. It also freezes well.
Apple Britain Cake Cider Dessert