July 24, 2012
This is a really easy and quick dessert to put together but it’s also seriously addictive. It's an odd and very old recipe. It must be old because I remember eating a version of it as a kid.

I often hear TV chefs telling us that, although they were poor as kids, the mothers and grandmothers would always conjure up wonderful meals out of next to nothing. That wasn’t my experience. Most mothers and grandmothers were just too busy or too tired from working every day to cook anything very much at all. But I do remember one or two dishes and this is my attempt to recreate a pudding that the mother of one of my friends made. To be honest, I’m not sure it’s a very accurate recreation (it was a very long time ago) but I’m pretty sure that cake and marshmallowy meringue were involved somewhere.

My friend’s mother was from Scotland and so I always assumed that this odd little dish was from the same country. I’ve only fairly recently realised that it’s actually very like the venerable American dish ‘soda cracker pie’ and so how it came to the streets of south London in the days before the Beatles is anyone’s guess.

For this version I used a slice of a banana and dark chocolate cake that my wife baked, which worked really well, but other types of cake will do. Madeira cake, lemon cake, almond and other nut cakes would all make excellent substitutes. The white chocolate is optional but very nice, of course.

Whipped cream is the obvious thing to pile on top, but the pie is very sweet and I prefer the slight sharpness of thick yoghurt. However, I do confess to adding a little chocolate Philadelphia to my slice as well. 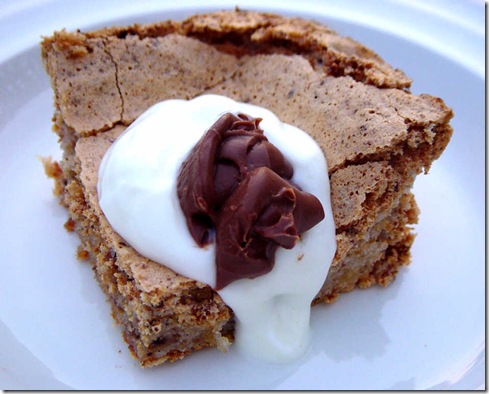 I reckon that you can get 6 to 8 restrained portions from this amount, but it’s ridiculously hard to be restrained. Incidentally, if you leave out the cake component, this recipe is similar to the equally venerable ‘forgotten pudding’, which is also an outrageously addictive treat. Nigella has revived that recipe and her version can be found here.

Whisk the egg whites to the soft peak stage. Add the vanilla and cream of tartar. Continue whisking while gradually adding the sugar until the whites are stiff and glossy.

Whiz the cake into crumbs in a processor. Fold the cake crumbs and chocolate into the egg whites. Place the mixture into the tin, levelling the top. Bake for 35 – 40 minutes until the top is crispy and golden.

Allow to cool in the tin before carefully removing – it’s a fragile thing. The pie will sink in the middle as it cools; this is normal – it’s where you add the creamy bits.

And finally a picture of me at roughly the time I enjoyed my first cake meringue pie – just to prove how old I am, I suppose. 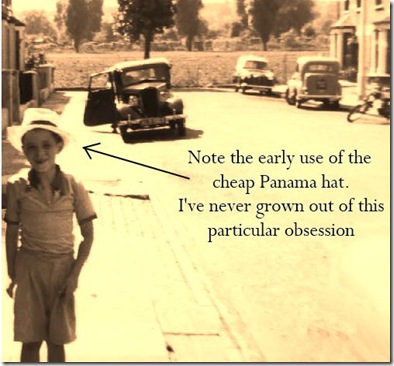