July 07, 2012
Around five or six years ago I got a little carried away (well, actually very carried away) at the Pick Your Own farm and came home with far too many gooseberries for the classic sauces and jams that I wanted to make. Looking through some of my cookery books for inspiration I found a recipe for a ‘Spicy Gooseberry Sauce’ in a Sainsbury’s Fish Cooking book published back in the 1980s. This was a little different to the classic, simple gooseberry sauces for fish. Essentially, it’s a good old-fashioned devilled sauce with a mix of ingredients more reminiscent of chutney than a smooth sauce. The British tradition of devilled sauces often seems to be on its last gasps and I think that’s a great shame. I made a version of the classic Gubbins Sauce a little while ago but this fruitier sauce is at least as useful.

I’ve developed and complicated the recipe since then but, despite a long list of ingredients, it’s really easy to make and very versatile. It’s good with oily fish such as mackerel but it’s also very pleasing with chicken, duck and especially pork. It can even be served hot or cold. I usually make a fair bit of this sauce while the gooseberries are ripe for picking and freeze it in small batches. It’s intensely flavoured and 100 – 125 ml of sauce per person is normally plenty (unless you’re really addicted to the flavour like me).

This sauce contains some tarragon vinegar and so a quick seasonal digression on that subject first….. 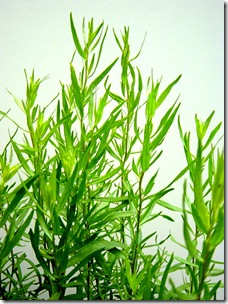 It’s possible to make a multitude of differently flavoured vinegars and many of them are very worthwhile but there are two that have proved especially useful to me throughout the year for sauces, marinades and dressings: blackberry vinegar and tarragon vinegar.

There are a number of ways to make tarragon vinegar but I use a very simple method. Pick three long, fresh stems of French tarragon, wash and dry them and put them into a 500ml bottle of white wine vinegar. Shake the bottle a bit and put it in a cupboard for a week or ten days, shaking occasionally if you remember, until it seems to have the right amount of herby taste. Filter the vinegar and put it in a pretty bottle. And that’s all there is to it. You can put a fresh sprig of tarragon in the bottle, which looks nice if you’re giving it as a gift, but has the disadvantage of making the tarragon flavour stronger over time and so can make it tricky to judge how much to add to recipes.

That’s the end of the digression and so back to…. 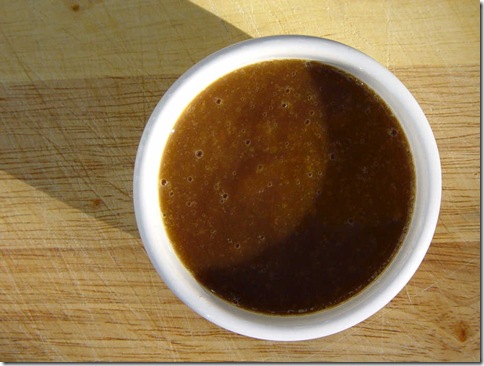 Wash the gooseberries, top and tail them if they need it and remove any damaged or unpleasant bits. Then simply put all the ingredients together in a non-reactive saucepan and bring to the boil while stirring frequently. Lower the heat and allow the mixture to simmer very gently, uncovered, for 30 – 40 minutes until the gooseberries have collapsed and the flavours have mingled.

Allow the mixture to cool a little and then liquidise it. Work the sauce through a fine sieve and that’s all there is to it. (Told you it was easy). Taste and adjust the sweet and sour balance with a little sugar or vinegar if it seems to need it. 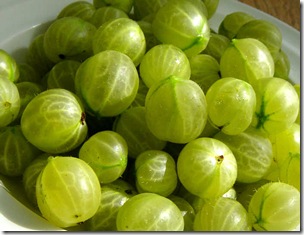 I know that the tarragon is only a small (but important) part of this finished sauce but nonetheless I thought I’d enter this into the July Herbs on Saturday blog challenge created by Karen from Lavender and Lovage and hosted this month by Vanesther from Bangers and Mash.