October 31, 2012
The other day, I happened to find a bag of apples being sold cheaply at the local supermarket and, for some reason, this soup was the first thing that came into my head. Strange, since I've not really thought about it for around 35 years.

Spiced apple soups have been around in English cooking for centuries but this particular version is a very 1970s dish. At that time curried soups seemed to be everywhere, at least in England. It was the 1970s when Jane Grigson launched the great classic that is curried parsnip soup on the unsuspecting world. Some of these soups were even served chilled, which was sort of cutting edge at the time. This is a recreation of one of those soups, although admittedly not a truly faithful reproduction. I'm sure that in the 1970s there would have been a lot more butter and there would certainly have been cream and not yogurt.

I thought about specifying the exact mixture of spices to use, but this was the 1970s and using anything other than curry powder would have been the height of eccentricity. You do need a fairly hot curry powder for this recipe, so a Madras mix should be fine. You could buy one or, if you happen to have a bit of time, I can thoroughly recommend making Michelle’s recipe over at ‘The Tiffin Box’ for this particular spice mix.

You could use any dessert apple for this soup but I'd avoid a really sharp apple such as a Granny Smith. After all, you could increase the acidity by adding lemon juice but it’s much harder to remove it. I used the variety Pink Lady in this case, although I have to admit that's due to the bargain bag rather than careful planning. 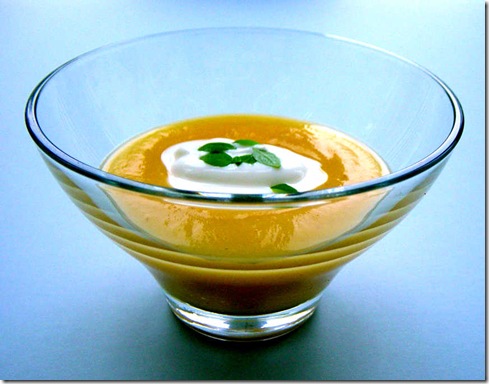 This works well as a little appetiser served in a 1970s glass, but it can also be served either hot or cold as a light soup course. This amount will serve 2 – 3 people as a full-scale starter but quite a few more as a little pre-dinner treat.

To finish the soup each bowl should have:
A dollop of Greek yogurt
A small sprinkling of Greek basil leaves

Very slowly sweat the onion in a little oil until soft but not coloured. Meanwhile, peel, core and chop the apples into largish chunks. As you finish preparing them, drop them into a bowl with the juice of ½ the lemon and toss around to coat them.

Once the onion is soft, stir in the curry powder and continue frying gently for a minute or so, stirring. Add the apples and then the stock. Bring to the boil, cover and simmer gently for around 20 minutes until the apples are very soft.  Allow the mixture to cool a little, then liquidise until very smooth. Add the other half of the lemon juice (unless the mixture already seems sharp) and some salt to taste. If you want to serve the soup chilled then place in the fridge until very cold.

Check again that it doesn't need more lemon juice and salt before serving. This is particularly important if you’re serving the soup chilled since the flavours will be a little dulled by the cold. Add a generous dollop of Greek yogurt to each bowl or glass and sprinkle over some fresh basil. The small leaves of Greek basil look pretty on this dish I think, but shredded leaves of the more usual basil will do fine.


Heading back to the seventies with a bowl of curried soup in hand did bring to mind this noteworthy bit of TV, which has now surfaced on YouTube. It’s an appearance by The Tams on a Christmas Top of the Pops programme in 1971 singing the slightly irritating song ‘Hey Girl Don't Bother Me’. The three Tams in a row carrying out the backing singing duties are unforgettable. The one in the middle might just have enjoyed a refreshing seasonal drink or two and eventually disappears altogether. Oh well, it was the 1970s – we had no internet then and had to make our own amusement.