October 13, 2012
For this month’s Random Recipe Challenge Dom of Belleau Kitchen has asked us to delve into the store cupboard and find an ingredient that we've so thoughtlessly neglected and then select a recipe that finally gets round to using it. Well, I chose my worst kept shelf. It’s the shelf where I pile up general cake-related stuff – dried fruits, sugar strands, stem ginger and that sort of thing. So without looking, I reached to the back of the shelf and pulled out a large pack of Agen prunes. Now, I like prunes and I use them in a number of recipes but this was clearly an accidental over purchase and now was the perfect time to put them to good use.

Locating recipes containing prunes proved surprisingly difficult. I decided to try the pile of books that I've bought in the last year from charity shops. Roughly 23 books later I came to ‘The Hairy Bikers’ Food Tour Of Britain’ and in it was ‘Lincolnshire Plum Bread’. Since Dom is the master and commander of this challenge I felt a bit uneasy about entering a recipe from his own part of the world, but rules are rules. You can find the recipe here on the BBC site. I don’t really know how authentic this particular bread might be but it’s very tasty and great with cheese – Lincolnshire Poacher would be ideal. 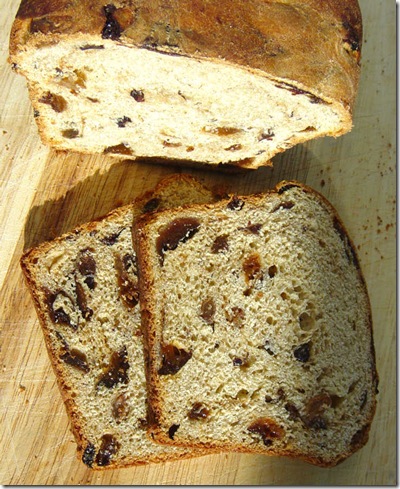 I have to be honest and say that, lovely though this bread turned out to be, my favourite plum bread was actually made by an Italian quite a few years ago. She claimed that it was made to a traditional British recipe but it was more like a brioche than a conventional bread and I suspect that there was some alcohol involved somewhere. I didn't manage to get the recipe but if I ever get a spare few days I really must try to recreate it.